A joint venture construction project has been using FlowForma Process Automation to not only speed up processes, but to ensure compliance and continuous improvement through better visibility.

Stemming The Tide Of Pollution And Paperwork 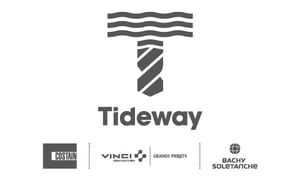 CVB, a joint venture of Costain, VINCI Construction Grands Projets and Bachy Soletanche, won the £605m tender to build the east section of the Thames Tideway Tunnel in London. A huge project intended to clean up the capital’s river, the new ‘super sewer’ would be 25km long and 7.2m wide. Process challenges familiar to any multi-site construction project were compounded by the complexity of the build and the impact of COVID-19.

“We had lots of sites and a widely distributed workforce so communicating between them was always going to be a challenge,” said Lampros Arvanitis, BIM Manager at CVB. “We wanted a way to speed up processes and reduce the use of paper.”

An over-dependency on paperwork is always problematic on construction sites – physical forms get lost; information is recorded wrongly – and with the added risk of carrying COVID-19, there was even more reason to look for a digital alternative. Arvanitis knew too that digital workflows would be more transparent and accountable, making it easier to stay compliant with building regulations. A clearer view of processes would also make it easier to improve them.

The joint venture was already using Microsoft SharePoint as a document repository, so the FlowForma Process Automation tool ticked all the boxes when he went looking for a workflow solution. Tight integration with the Microsoft platform and a familiar web interface would prove crucial for its fast adoption.

The other factor that swung it for the FlowForma Process Automation tool was its ‘no code’ credentials, the fact that non-technical people can quickly learn how to construct workflows. Within two months of signing up, CVB had something to show for the investment. Lampros Arvanitis had taken part in FlowForma’s SureStart programme, on-the-job training where workflows are developed to go live. “It was a very good experience,” he said. “It was a great way to learn because it encouraged us take over and start doing workflows for ourselves.”

Not only was he impressed by FlowForma Process Automation’s ease of use, he liked its flexibility, the way documents could be output into CVB templates. And because of the nature of the project – working in a difficult-to-connect tunnel – the team also appreciated offline capabilities. ‘Flows’ would be held on a device until it was reconnected to the local network, or mobile network if the user had FlowForma’s mobile app.

The first process was New Project Starter/Leaver Forms, quickly followed by Daily Site Diaries. Both were smoothly transitioned from paper-based processes with benefits immediately apparent, particularly in Diaries, where fields were pre-populated from one day to the next, saving time on having to input repeat entries.

Project Starter involved approval processes, onboarding different people at different stages in a digital workflow that reduced the risk of delays. An added bonus with both was how they helped improve CVB’s remote working capability during the pandemic, when physically sharing paperwork was no longer possible.

Planned future flows fall into two categories: document driven processes like Field Change Requests or checklists, like Environmental Inspection procedures. All use business rules in FlowForma Process Automation to generate documents, emails and connect with sub-sites in SharePoint, which acts as the main document repository.

FlowForma Process Automation made an immediate impression on the CVB team, reducing paper usage, speeding up processes and improving governance. Ease of use and familiarity were also big benefits as Arvanitis explained. “We are not dependent on IT to set up processes and they work with our existing templates in SharePoint,” he said. “The flows look and feel familiar to what we were doing already so it was a smooth transition.”

Like a lot of organizations, CVB still needs a PDF output at the end of a process, something that FlowForma Process Automation provides because it is always cognisant of bringing people along on a digital journey, helping them to change the way they work. Familiarity is one way to do it. “It has to be easy with a familiar interface if it’s going to be adopted and used to replace paper. FlowForma Process Automation has done that,” he said. “There has been a lot of uptake, different teams looking to use it, and we have a long list of processes people want to digitize.”

The digitalization of previously paper-based processes has also led to continual improvement. Surfacing the FlowForma Process Automation data in Microsoft Power BI dashboards has provided valuable insights to act on. “We wanted to have better structured data to analyse what we are doing and improve compliance around our processes,” said Arvanitis. “FlowForma Process Automation has given us the flexibility to improve a lot of different steps and outputs in our processes.”

‘‘We are not dependent on IT to set up processes and they work with our existing templates in SharePoint. The flows look and feel familiar to what we were doing already so it was a smooth transition."

“There has been a lot of uptake, different teams looking to use it, and we have a long list of processes people want to digitize.”

"In the past year we have saved at least 700 hours on repetitive tasks alone thanks to the FlowForma Process Automation tool."