FlowForma Listed as 'One to Watch' by Business & Finance 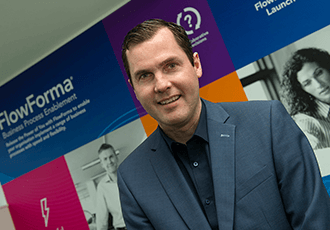 In this article Deanna O'Connor of Business and Finance investigates who's behind the FlowForma company, how they help customers and its plans for the future.

What is FlowForma BPM?

An award-winning Office 365 Add-In, FlowForma BPM enables business users to deploy business processes with speed and flexibility, no matter what the complexity. Sitting on the SharePoint® platform, the FlowForma Cloud BPM tool incorporates forms, workflow, document generation and decision making all in one place.

FlowForma is a Microsoft Partner, with over 60 customers across Europe, South Africa and North America. The company is headquartered in Dublin with offices in London and Boston.

FlowForma is headed up by Neil Young, who spotted an opportunity for a BPM tool while working on a customer project in Ireland’s leading IT services providers, Ergo. Neil has worked with Microsoft technologies for over 20 years.

Founder and former CEO of Singularity, Padraig Canavan, was appointed Chairperson of FlowForma in 2016. A pioneer in BPM, Padraig sold Singularity for $48.1M in 2011. Also sitting on the board of directors are Ergo’s CEO, John Purdy and Marc Murphy, CEO of Fenergo.

How it is Funded?

The FlowForma BPM tool was officially launched in May 2013 and incubated within Ergo for a further 3 years. It was self-funded from Ergo with support from Enterprise Ireland that really enabled Neil Young to get a team behind this product quickly.

Since becoming a separate entity earlier this year, the company has secured external investment from the board of directors and the senior management team.

With 110,000+ users worldwide of the FlowForma BPM tool for Office 365 and two awards from Microsoft and the SharePoint community under its belt, the future looks positive for FlowForma. Recent appointments have been made at C level to help steer its next innovation wave and entry to new markets such as the US and Western Europe.

Keep up to date on FlowForma news and events by subscribing to our newsletter - simply provide your email address in the footer below.