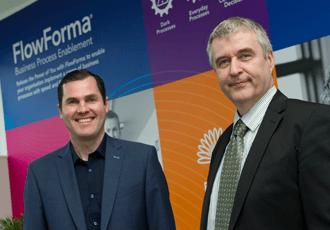 FlowForma has crossed the 150,000-user threshold, highlighting the spectacular rise of an Irish start-up that’s seen 62% year-on-year growth in 2017/18. Key to success has been the adoption of the firm’s Business Process Management (BPM) solution in the US and Asia as well as Europe. A cloud-first, Software-as-a-Service business model has accelerated new market entry.

Neil Young, CEO said, “Our goal when we launched two years ago was to offer an alternative to the inefficient workflows and excessive paperwork that plague every business, an alternative that would be attractive to non-technical process owners. Our success is testament to the strength of our vision, the veracity of our product, and the global opportunities that cloud affords.”

FlowForma’s international ambitions were signposted at the outset when Padraig Canavan was made Chairperson. A pioneer in BPM solutions, Canavan built a global business with Singularity, which was sold to Kofax in 2011 for US$48.1m.

FlowForma is the second spin-off from Ergo, a leading Irish cloud and managed services company. The first was Fenergo, which received $75 million investment in 2015 from New York-based private equity firm Insight Venture Partners.

The popularity of FlowForma reflects a growing appetite among businesses for self-service applications that can be developed and deployed without technical expertise, part of “the consumerization of IT” that is transforming enterprise technology.  Its “no-code” approach has caught the attention of analysts as well as customers. Forrester praised FlowForma in its New Wave report for its “easy on-ramp and rich process tools”, describing it is a strong and proven low code platform.

Winning the Microsoft People’s Choice App award at Orlando, Florida, in 2017 helped rubberstamp the firm’s reputation and emphasized strong ties with Microsoft – the application integrates seamlessly with Office 365 and SharePoint to give organizations a powerful BPM solution that’s up and running in hours.

All of this has put FlowForma on a strong footing for further expansion, according to Neil Young. “We have a thriving business in the UK that we’re looking to build on and we’re starting to make inroads into the US. We’ve grown from three to 30 employees in two years and fully expect to double that number again in the next two years,” he said.