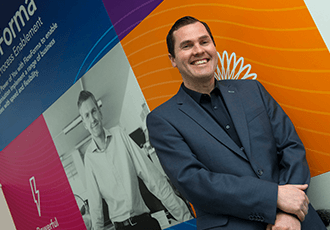 Services have been good to Ergo. In more than 20 years of business, the Dublin-based technology company has grown to more than 200 employees, and revenues exceed €25 million.

But products offer the possibility of selling to more customers, anywhere in
the world, and generating recurring revenue streams. Ergo has already successfully spun out a product company, Fenergo, a financial software provider employing more than 170 people between offices in Dublin, London, New York, Boston and Sydney. Now FlowForma, a new product from the Ergo stable, is looking to follow the same template. Gordon Smith reports on the key steps.

Before anything can happen there must be an openness to ideas like Fenergo and FlowForma, says Neil Young, Managing Director of FlowForma. “There’s an element of that entrepreneurial culture being in the Ergo business in the first place, and that would come from the CEO,” he says. From its services work with Microsoft SharePoint technology, Ergo had spotted a gap in the market when customers requested the ability to make changes to forms and workflow. Young and a colleague, Osvaldo Sousa, took a business case to Ergo CEO John Purdy and the Board of Management. Having got the all-clear to flesh out their idea, product development began in January 2012.

Rather than spending months or years meticulously crafting a full-featured product, Young worked with the company’s product management consultant, who advised using the lean model. This involves creating a minimal viable product that includes only the essential features at the start.

This approach gets products to market faster; FlowForma launched in May 2013, less than a year and a half after work started. Crucially, it also reduced start-up costs for Ergo. “We need to think lean. We’re a medium-sized organisation in the Irish context, and, in the wider product context, we’re a smaller company,” says Young. “I’d say for the first 15 months, we would have spent close to €200k, which is very lean. I believe if we had just gone all in at the start, we would have spent €1 million.”

The team itself was also lean. Some developers were assigned on a fulltime basis, but other Ergo staff, including Young and Sousa, worked on the project part-time which helped to control costs until the business case was proven.

Two added advantages emerged from using a lean model. One is that FlowForma’s people could better understand the issues their potential customers faced. “Because we have a lean background, we’re talking with customers about process improvements, so it fits hand in glove” Young explains. Restricting the product to a compact, strictly defined set of features also avoids providing customers with capabilities they neither wanted nor needed. “We purposely didn’t put all the features in, and we discovered that there are a lot of products with features that people don’t use. They don’t want a hammer to crack a nut,” he adds.

In parallel with early product development, the team commissioned market research to identify an audience and refine the product to suit that audience’s needs. This is also part of the lean methodology. Supported by Enterprise Ireland’s Market Access Grant, Ergo used an independent market research company, which polled 252 heads of IT functions across four market segments in the UK – manufacturing, financial services, healthcare and education.

“This wasn’t a lead generation activity, it was market research. We were very clear about that. We worked with them. We had a prototype, and we produced a short video to show the product. On average, the response was 90 per cent thought this would be viable in their organisation,” says Young.

He believes that cycle of proof of concept, market research and minimum viable product produces good results. “All of that will inform you whether you have something or not. You’re very conscious of some people internally in the organisation saying ‘it’s a great idea’, but you have to have external validation,” he says.

After the initial high-level pitch came a more detailed business case, and once the project started, there were monthly reviews with Ergo’s Board of Management. These could be nervy affairs, but they were also an invaluable chance to tap into the board’s previous experience, says Young. “During those first 15 months, there was always a question, ‘do we kill the project?’ and that’s a tough question. That’s why we took the steps we took, to make sure we all believed in it. There were definitely learnings that the CEO and CFO knew from Fenergo and brought to the table with this venture.”

One of those more recent moves involved putting dedicated FlowForma staff on the ground in the UK market at an early stage – which happened faster than it did with Fenergo.

Next came a testing phase. Ergo targeted a beta group of three customers, with whom it had strong relationships, and asked them to test the product and give feedback. “One rule of thumb we have is a rule of three. If one customer is looking for something that’s not really a compelling reason to add it. If it’s a very custom feature and not a product feature, we now have a layer to deal with that. But if three customers are looking for a feature, then that makes a lot of sense,” says Young. He sums up the philosophy as “always be willing to change and always be open. You’ve got to take external views, and you need some way of filtering all that, but the ability to change and adapt is very important.”

Enterprise Ireland’s Innovate for Growth programme exposed the company to open innovation techniques, and one of the concepts it promotes is ‘zero distance’ between customers and partners. FlowForma invites them to contribute suggestions for features they would like to see in the product by choosing from a list.

FlowForma grew organically, and each subsequent release of the product has included elements that were voted on by partners and customers. “By getting that consensus on what the feature set should be, it completely shifted the roadmap. I don’t believe you have a product if you don’t have a roadmap,” says Young.

Ergo’s familiarity with the SharePoint market meant that it already had a good sense of where potential competitors might be. Armed with this knowledge, its approach has been to occupy brand new territory – what’s known in product marketing terms as a ‘blue ocean strategy’. “Red ocean is where the me-too products are. You’re looking for a space where nobody is in. It’s about constantly looking at that, reinforcing that and making sure your roadmap is addressing that,” says Young.

Though part of a larger organisation, FlowForma has a very clearly defined identity. It has 20 staff, eight of which exclusively work on R&D. It’s treated as a separate strategic business unit with its own pre-sales consultant and marketing functions. This helps because Young believes working in a product-focused company calls for a different mindset. “It’s fair to say that you can’t go and spin out your own culture when you’re a division of a larger organisation. We’re aware that product companies work a different way. In a services business, you’re working on projects, and you don’t have an R&D development team to cover for. It’s a different beast.”

With interest developing in the UK, the next step was to engage with consultants McDonald Butler, a UK-based sales and marketing agency recommended by Enterprise Ireland. At a workshop with the firm, Ergo mulled over the decision to sell directly or via partners. Young admits a service company’s natural inclination is go direct, so it’s another way in which a product company needs to develop a different culture to its parent’s.

The Irish market isn’t large enough to support segmentation, but working with partners was the best option for a much larger market like the UK, he believes. FlowForma attended the SharePoint Evolution conference in April and 30 leads resulted, all of which were passed back to the partner network. Young says this is a fairer approach. “Partners have to trust you. We’re seeing the fruits of that by putting a lot of effort in the channel. It’s tough, because we could go direct in to customers and close deals quickly, and the partners can have a different culture, and it can be a longer wait, but we can see the benefits of it now.” McDonald Butler carried out 30 calls, 10 profiles and held meetings with potential partners in the UK. One of the partners identified by this exercise was providing technology consultancy to the NHS and had been looking for the kind of product FlowForma could offer.

One month after initial meetings, they began working together. By October 2013, with the UK healthcare market looking promising, FlowForma moved quickly to appoint a UK-based Channel Manager, who was in place by January 2014. This was another lesson from Fenergo, says Young.

For now, FlowForma remains in the Ergo stable but it has its own dedicated team, a separately branded website, and a spinout is planned for either 2016 or 2017. In its most recent financial year to March 2015, FlowForma had grown 400 per cent year-on-year in terms of customers.

More than 47,000 health administrators in the UK use it for submitting leave requests, expense claims and performance reviews, generating a profit of close to €1 million. “This year, we’re looking to double again. Our target for this year is 70 new customers between the UK partner network and Ireland, and that seems achievable,” says Young. “You shift from doing all the right things at the start; now the rubber hits the road. There’s definitely pressure around sales. The hard work never ends.”

Enterprise Ireland works with Fenergo and has supported FlowForma’s development.

This article was written by Gordon Smith and published in Enterprise Ireland's Vol 11, Issue 02 of 'The Market'.

Note: Since this article was published FlowForma employs 30 full time employees, serves over 110,000 users and has become a separate entity.